Proposals rip the green heart out of Woodford

Details emerged on 20th October of plans to take 238 hectares (nearly 600 acres) of Green Belt out of the heart of Woodford to make way for 2,400 new homes. This is in addition to 1,000 homes already approved on the Aerodrome site. The area to be removed from Green Belt is shown in pink in the map below. It is a large area on either side of Chester Road, bounded by Old Hall Lane, the Aerodrome and Bridle Road in the south and by Church Lane, Moor Lane, Jenny Lane and Woodford Road in the north. 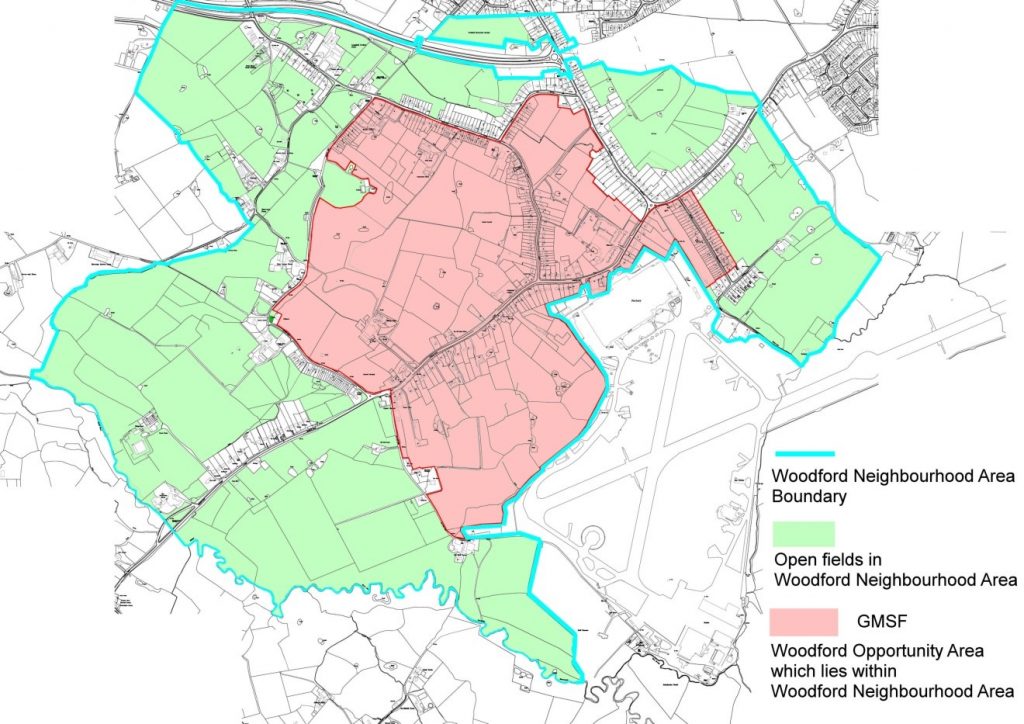 This is part of a new joint plan for the whole of Greater Manchester (Greater Manchester Spatial Framework), which proposes to take large areas of land out of Green Belt across Greater Manchester to make way for new homes plus commercial development and the infrastructure to support it. The draft plan has been devised by council executives and officers representing each of the 10 boroughs in Greater Manchester. It has been two years in the making and there have been two rounds of informal consultation, but elected councillors and MPs have only recently seen the details of the draft plan. The combined authority leaders reviewed the draft plan on 28th October and voted in favour of proceeding to consultation on the proposals from 31st October to 23rd December.The proposals will remove large areas of land from Green Belt in neighbouring communities in Greater Manchester as well. The following map illustrates the potential cumulative effect of Cheshire East Council and GMSF proposals within a short radius of Woodford.NCGV = North Cheshire Growth village at Handforth East; GMSF OA20 = Woodford Opportunity Area 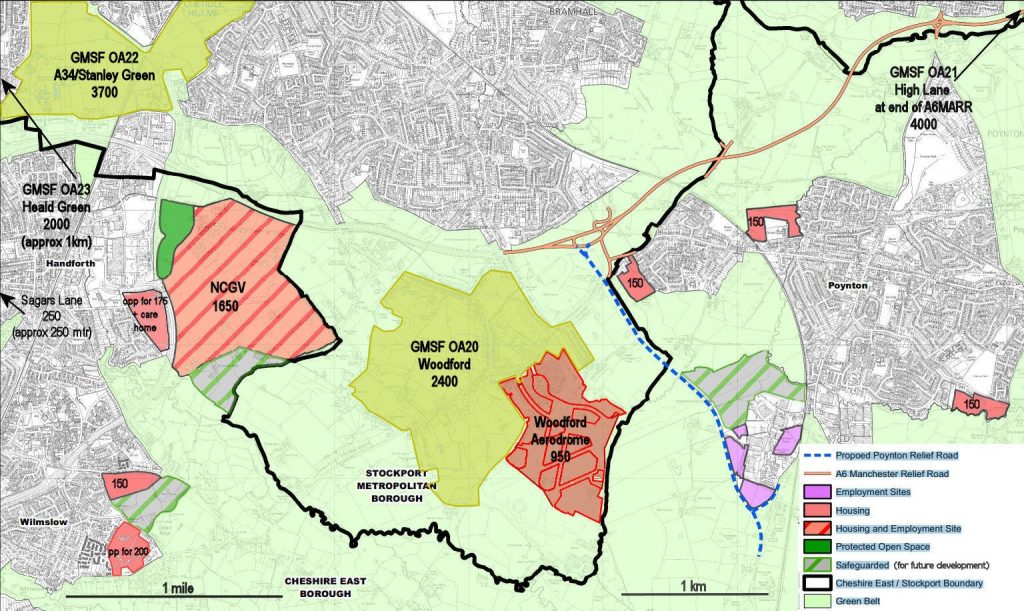 Further information and the draft GMSF document can be found via the GMSF website, https://www.greatermanchester-ca.gov.uk/info/20081/draft_plan.  Click on the link to the documents, then on Draft GMSF October 2016 Consultation in the table and then Read and Comment on Document. Information relating specifically to Woodford can be found in Section 28 Allocations, Subsection 28.8 Other Allocations and finally 28.8.20 Woodford.  Paper copies can be viewed at Stockport Town Hall and Bramhall Library. Paper copies of the sections relating to Woodford can be viewed in the foyer at Woodford Community Centre.Our local MP, Mary Robinson, and local councillors Brian Bagnall, John McGahan and Mike Hurleston are all opposed to the proposal to take so much land out of our Green Belt, which is an asset used and appreciated by many people in Greater Manchester and neighbouring communities.
The management committees of your local organisations, Woodford Neighbourhood Forum (WNF), Woodford Community Council (WCC) and Woodford War Memorial Community Centre (WWMCC), will be doing everything they can to save the Green Belt in Woodford. WNF will be pressing on with the Neighbourhood Plan.

Most importantly, please respond formally to the consultation between 31st October and 23rd December by one of the routes shown below:

Online: http://gmsf-consult.objective.co.uk/portal (you will need to register on the GMSF portal first to obtain a log in ID, which may not arrive immediately)

Make sure that your views are known