The long-awaited revised draft GMSF was published in January and is open for consultation until 18th March 2019.

The amount of land proposed to be taken out of Green Belt across Greater Manchester has been reduced, aided by slightly reduced housing numbers, a policy of brownfield first, town centre regeneration and higher density of development. The proposal for Woodford has changed. It is no longer a site for 2,400 homes in the centre of Woodford, but now comprises 750 homes (in addition to the Redrow development currently in progress) on the former aerodrome site.

You can view details on this link: https://www.gmconsult.org/communications-and-engagement-team/gmsf/ Click on one of the links to the “full draft”. In the document, the proposals for development in Green Belt in Stockport start on page 302.

The proposals for Woodford are code-named GM 41 and can be found on pages 325 -327. Woodford Neighbourhood Forum and Woodford Community Council committees are studying the revised strategy and development proposals carefully and will issue a further bulletin in due course. 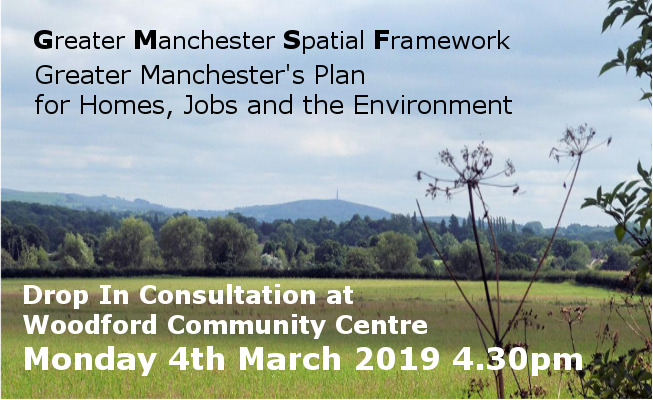 Stockport Council have organised a number of drop-in events, giving local residents the chance to speak to a member of the Council’s planning team as well as the opportunity to provide comments. One of these consultations will be held at Woodford Community Centre on 4th March, other venues an dates are listed below:

Cheadle Hulme, Saturday 16th February from 9.30am to 1pm at the Kitchen, 5 Warren Road